Gnocchi is of Italian origin. It is a little pasty thing – such that it resembles method of cooking of pasta by boiling them in salted water and dough. However, there are mashed potatoes in them, you will not normally find in pasta.

As with many other Italian specialties, there are as many variations of gnocchi as there are regions in Italy and Italian housewives. Gnocchi dates back to Roman times, and at that time it did not contain potatoes, but was made of a porridge-like dough. The potato variety only came after the potato had taken its way to Europe. And now it’s come to stay.

How to make gnocchi

Gnocchi is served – like pasta – by turning in a sauce or getting it poured over. A good choice is the Neapolitan marinara sauce or a more traditional tomato sauce. But here on the picture they are served with basil pesto and some extra good olive oil.

Tip: Have you cooked potatoes left over from dinner, so you can easily use them. Then you also save the time to boil potatoes, which undoubtedly makes gnocchi even more fast-mums! 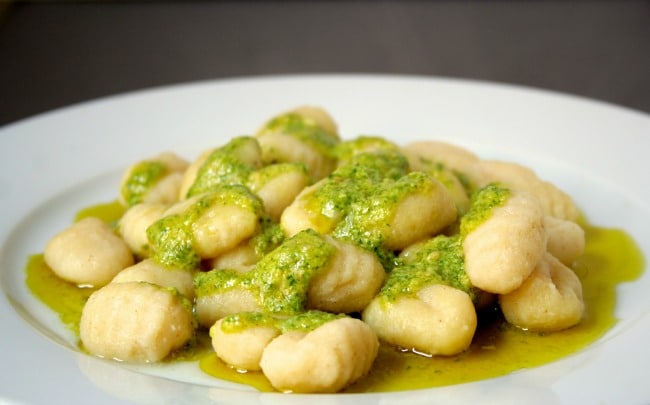