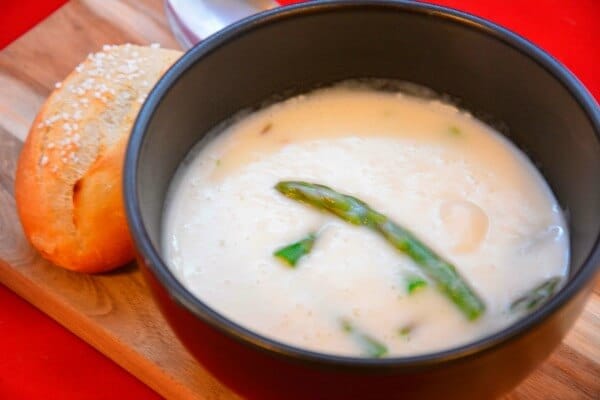 Mums asparagus soup. During my childhood, the asparagus was something we got as scrub for a big family celebrations. They are quite expensive then, ‘till now, but not more expensive than a serving of asparagus soup that can be cooked for about a flat 10.

It may be cheaper to buy a powder or a frozen asparagus soup. As for the powder, it is not as yummy as when you make it yourself. As for the frozen case, it takes longer to prepare and not as quick as you or your mom preparing it. Why do the hassle if it does not take a very long time to cook a tasty homemade asparagus soup.

You will need the following to prepare homemade asparagus soup for 4 people:

How to prepare homemade asparagus soup

You can eat the soup with bread. For example, it may be a homemade potato bread. On the picture above, it’s a fairly common bread that has been slightly brushed up with a little salt on top. You can do this by making the bread slightly wet with a little cold water and sprinkle it with a little coarse salt before warming it in the oven.

Things You Didn’t Know About Asparagus

Do you know that every year there is an asparagus festival in the German town of Schwetzingen, where an asparagus queen is celebrated? You certainly don’t, do you?

Well, asparagus seasons in June – for both green and white variety. As a matter of fact, Germans are passionate about the white asparagus, or other often termed as “white gold” or king of vegetable”. During this time, asparagus is at its peak and tastes best while economically friendly. Historically speaking, asparagus was first eaten 20,000 years ago not just by the Danes but also with the Egyptians.

Eating Asparagus before and after drinking can have a beneficial effect. If you’re planning to have a night out on the tiles, eating the vegetable before you start drinking could help protect your liver. The amino acids in asparagus have been found to help metabolize alcohol to get it out of your body faster. Excess drinking can do damage to your liver, and it’s good to eat something like asparagus, which protects your liver cells and the enzymes in asparagus can help break down the alcohol and alleviate hangovers.

Asparagus is rich in medicinal properties. Asparagus has been used as a medicine since ancient times. It is believed that asparagus was first cultivated some 2,000 years ago in the eastern Mediterranean Region. Romans and Greeks used asparagus as food and medicine. Asparagus cured a number of ailments from toothache to heart disease.

White asparagus is in fact the same with green asparagus but grown underground. As the spears of white asparagus grow, they’re completely covered with a thick mound of dirt or black plastic so they’re never exposed to the sunlight. This prevents them from producing chlorophyll, the green-tinted molecule that’s responsible for turning sunlight into energy.

If you want to lose weight for the summer – asparagus is perfect for you – it contains absolutely no fat or cholesterol.